Communities Dedicated to the Parks

Local parks play an important role in society, particularly in a society increasingly distracted by technology and 24-hour work schedules. Thankfully, parks are once again becoming a staple for many communities and are helping families make great memories.

Harris County Precinct 4 parks and preserves are playing an important part in that resurgence for communities in north and northwest Harris County. Studies show that parks not only preserve natural environments, but provide meaningful physical, mental and emotional health benefits. Parks encourage a more active lifestyle and allow safe opportunities for exercise, recreation, networking, and learning for all members of the community.

With all these benefits, Precinct 4 parks attract a large number of loyal and diverse visitors who take advantage of the programs available at their local community centers. From bicyclists to kayakers to outdoor enthusiasts, these regulars serve as models for embracing the outdoors.

For Nancy Ramirez, the Spring Creek Greenway is an amazingly peaceful retreat. She loves the outdoors and enjoys walking and riding her bike along the Judy Overby Bell Trail. On many of her weekly rides, Ramirez bikes to one of her favorite spots on the trail, a beautiful view of a meadow along Spring Creek.

“It’s just so peaceful,” said Ramirez. “It’s hard to leave. You feel like you’re far away from the hustle and bustle.”

This tranquil piece of greenery has provided a place of rest during many of her rides. The meadow often reminds her of Psalm 23 – “He makes me lie down in green pastures. He leads me beside quiet waters. He restores my soul.”

On some days, Ramirez finds herself biking the entire Spring Creek Greenway Hike and Bike Trail. She once began her day with breakfast in Humble and biked the trail all the way to Old Town Spring for lunch. During her rides along the trail, she has seen many types of wildlife, such as deer, heron, and eagles. An encounter with a great blue heron stands out as a favorite moment.

“I was so startled because it’s a water bird, but it was in the woods,” she said. “It was so beautiful and had such a large wingspan that I could hear the flap of its wings. That’s one of the reasons I love going. You never know what you’re going to see.”

Ramirez has volunteered at Jesse H. Jones Park & Nature Center since 2006. She’s hosted nature and pioneer tours, participated in the cleanup of Spring Creek, and served as a counselor for Summer Nature Camp. A few of her favorite volunteer events are Old-Fashioned Christmas, Pioneer Day, and Homestead Heritage Day.

Fun On The Preserve

Though only open for a little more than two years, Kickerillo-Mischer Preserve has already motivated and inspired many of its neighbors, including Patrick Alvarado. A retired high school football coach, Alvarado has lived in the area for more than 20 years.

“I was in line when they opened the gates,” he said. “I had been there a few times before it officially opened. I’ve always fished the natural creeks like Spring Creek, Cypress Creek, and Little Cypress because of their proximity.”

In his years of visiting the preserve to fish and kayak, Alvarado has caught black bass and catfish and even encountered an alligator. He’s also witnessed other wildlife that frequent the park, such as eight species of ducks, coyotes, and deer.

The preserve’s amenities are what Alvarado enjoys most. As a retiree, he makes time to engage in leisure activities about three times a week during the warm spring and summer months. Although he would spend the entire day fishing if he could, his wife imposes one rule.

“I’m not allowed to fish unless I do a run or jog, so I run a couple of laps around the trail,” he said. “Then I can jump in the kayak and get in three or four hours of fishing and still take my wife to dinner and a movie.”

Having such space and opportunity so close to home is something Alvarado truly appreciates. In addition to the preserve being a great place for him to get away, Alvarado also commends its educational programs, especially geocaching, canoeing, and youth fishing camps. 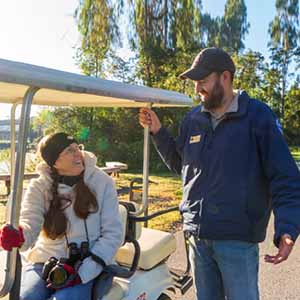 After attending an event at Jones Park more than two years ago, Yvonne Janak felt compelled to try more Precinct 4 park programs. Today, she attends as many programs and events as possible at Jones Park, Pundt Park, and Big Stone Lodge in Dennis Johnston Park.

Janak, a retiree from Spring, is also fond of participating in recreational programs with Trails As Parks, Precinct 4’s mobile parks team. She considers herself an outdoors person who loves learning about wildlife and botany, including the trees and wildflowers she sees while out on the trails.

“I don’t care how bad my day is, it’s an instant mood lifter to walk among the trees,” she said. “It clears my mind and puts me at peace. I particularly enjoy going out at night. I’m learning to do things I thought I would never be able to do.”

Archery, canoeing, hiking, TAP’s Owl Prowl program, and cart tours along the trails are a few activities Janak enjoys. The convenience of having Jones Park’s Nature Center so close to home keeps her coming back to learn and see something new.

A major part of the success of Precinct 4’s parks and programs are the dedicated workers who plan the programs and events. Christy Jones, the assistant education and volunteer coordinator at Mercer Botanic Gardens, said residents influence many of the programs offered there.

“We plan our programs six months in advance, and many are selected based on surveys we provide to visitors,” she said. “A lot of the programs we offer are specific requests from the community. We offer programs that focus on the traditional botanical aspects of our park as well as arbor education through the Legacy Trees program.”

Jones encourages the community to share their program ideas and to volunteer.