Community Enrichment Through The Arts

Entertainment and tourism are well-known benefits of theater, museums, concerts, and festivals, but the arts also enrich communities by serving a more profound purpose.

A recent study of the five New York City boroughs suggests that the idea of a “cultural ecosystem” – looking at the way cultural assets fit together in a community – has a pronounced positive impact on the overall well-being of the people who live there. The study showed that areas with a rich range of cultural assets saw fewer cases of child abuse and neglect, obesity, and serious crime, while scores in language arts and math were significantly higher than in areas with fewer cultural outlets.

According to the study by the University of Pennsylvania’s Social Impact of the Arts Project (SIAP), “Cultural activities have spillover effects that improve people’s lives.”

And while Harris County Precinct 4 may not have an arts scene to rival Manhattan, it can definitely boast one that is thriving and growing quickly. 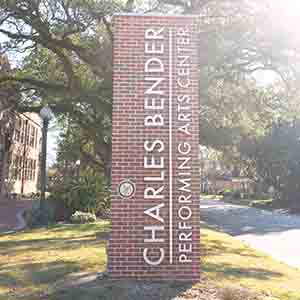 The building, originally built in 1929, previously served as a high school and administrative building for Humble ISD. It had been in disrepair for many years, and with no money for renovations, Humble ISD planned to demolish it. With support from the city council and administration, former Humble mayor Donny McMannes saw the structure’s potential and had the vision to transform it into a performing arts center. The city purchased the building in 2011 and began renovations two years later.

The Charles Bender Performing Arts Center has consistently brought high-quality entertainment to the Lake Houston Area since opening in 2014. Center Director Jennifer Wooden said, “Our desire is that people look to see what is at the Bender first before traveling downtown.”

Wooden recognizes the importance of the arts as an integral part of the community.

“It helps to build a well-rounded community,” she said. “We are big on supporting our sports here in Lake Houston and Humble ISD, but a little shy in other areas. When we have a classical performance, we’ll gift tickets to each school in the area. It’s neat to see them dress up and have a full theater experience.”

The Lake Houston area is also home to the Nathaniel Center, a performing arts center opened by Paul and Victoria Sarvadi in 2000 to fulfill their mission of bringing performing arts to the community.

“The professionally designed theater and high-caliber equipment are equal to that of a Broadway or downtown theater,” Chris Sarvadi, Nathaniel Center general manager said.

The Nathaniel Center also features professional-level ballet presented by the Kingwood Dance Theatre, youth theater productions by Center Stage, and performances from the Kingwood Pops Orchestra throughout the year.

Sarvadi said most performances range from $10 to $30 per ticket, making the cost and location convenient for the nearly 90,000 residents in the Lake Houston area.

Shakespeare in the Shade, along with Harris County Precinct 4, presents free, family-friendly Shakespeare performances in a unique outdoor setting at the Burroughs Park pavilion in Tomball.

“We present a prologue before every show,” said Amy Sutton, Precinct 4 events manager. “So even if you don’t know the play or fully understand the language, you get a little glimpse of the main characters and general action.

Sutton said having multiple character entry points, including from the “house”, where the audience is seated, is a unique feature to productions at the pavilion and an effective way to break the “fourth wall” – the imaginary barrier between the actors and the audience.

“Offering free, outdoor theater just gives this richness to the community,” Sutton said. “The arts and education know no bounds. The more you can give people, the more they will grow.”

Shakespeare in the Shade expanded in the spring of 2016 to include an all-day festival filled with Renaissance-themed activities for visitors to experience Shakespearean culture in a family-friendly environment that is close to home. A more recent expansion in 2018 added a Summer Reader’s Theater featuring Greek classics and a fall show, earmarked for Shakespearean tragedies.

“There are lots of ways to get involved in Precinct 4’s Shakespeare productions, even if you have no experience,” Sutton said. “Look for auditions, come help build sets, or be a stagehand.”

The Cypress Creek Cultural District sits in the heart of Precinct 4 and is a hub for cultural, performing, and fine arts.

Among the arts and cultural organizations that make up the district are the Barbara Bush Branch Library, George H.W. Bush Community Center (opening in late 2020), the Pearl Fincher Museum, and Cypress Creek Foundation for the Arts and Cultural Enrichment (FACE) – a nonprofit foundation that brings a variety of performing arts groups to the community.

A hidden gem within the Cypress Creek Cultural District, the Pearl Fincher Museum showcases fine art from both private and public collections at no cost to visitors.

Ani Boyajian, director of the Pearl Fincher Museum said, “The mission of the Pearl is to bring great art and art education to the community, especially to the residents in the greater Houston area and our neighbors in Precinct 4.”

While the University of Pennsylvania’s SAIP study points out that “culture doesn’t ’cause’ better health or less crime,” it does conclude that cultural resources are an invaluable asset to a community and that – even in economically challenged areas – access to the arts contributes significantly to the overall social well-being.