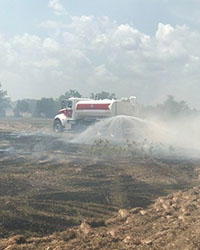 Precinct 4 road and bridge crews don’t just assist first responders; they are first responders.
When two grass fires broke out near Precinct 4 parks only a week apart, crews were on scene fighting the blazes alongside firefighters.

“Our crews were out removing trash on our roadways, mowing, and other vital tasks in the Precinct 4 area,” said Mark Noski, assistant superintendent of Precinct 4’s Road & Bridge Department at the Tomball Service Center. “But a little before 3 p.m., a call was received of a grass fire gaining ground in the Katy/Hockley area with Paul D. Rushing Park in its path.”

Crews responded with water trucks and ground support from Katy, Hockley, and Tomball. While road and bridge workers attempted to extinguish the fire, parks staff cleared vegetation to keep the fire from spreading. Within a few hours, the team and firefighters from Cy-Fair and Waller County quashed the blaze before it could damage Rushing Park.

The second fire broke out near Dyess Park on Aug. 4, killing one man.

Precinct 4 crews from Tomball, Bear Creek, and Hockley Camp arrived on the scene in less than an hour with water trucks and dozers to clear brush. Precinct 4 employees fought to protect a nearby home and prevented the fire from spreading to Dyess Park.

Because of their quick thinking, the fires were extinguished before they could spread.
“With the fast efforts from our fire departments, parks, and road and bridge crews – and police holding traffic to allow equipment to be brought in – the fire was extinguished within a few hours,” said Noski. “As always, Precinct 4 is ready and willing to be of assistance to our fire and police departments and, most of all, our community.”